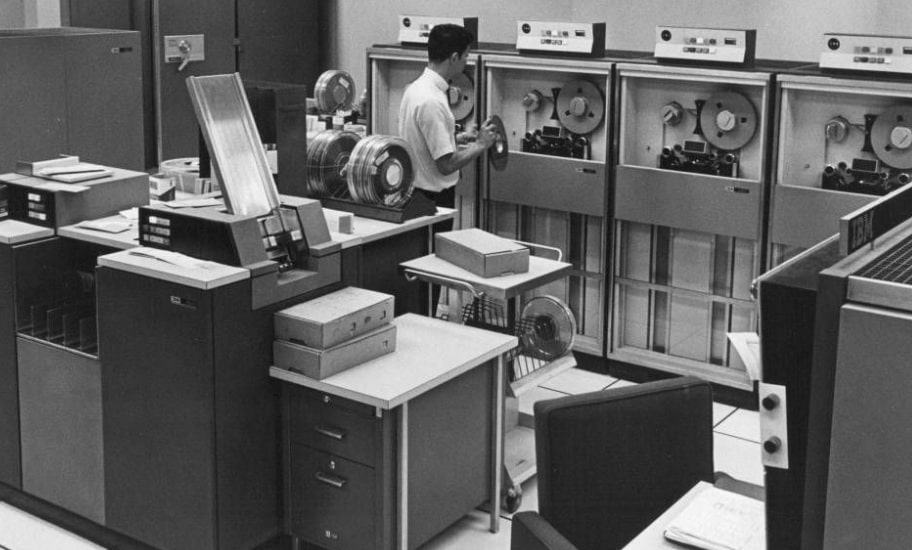 Surprisingly, the history of eLearning had its humble beginnings in 1924 with the introduction of Sidney Pressey’s “teaching machine.”

Now in the wake of a pandemic, which has forced billions to reevaluate the way in which they learn and teach, eLearning has been forced into the spotlight.

So to get a better picture of where eLearning is heading, looking back on the history of eLearning can teach us some valuable lessons and give a unique insight into the growing industry. Let’s get started!

Sidney Pressey was a psychology professor at Ohio State University who is credited as the first person in the history of eLearning to have built a ‘teaching machine’ in 1924. However, given the technology of the time, this machine was nothing like what we have today.

The teaching machine was essentially a guided MCQ-solving device for students. It would show questions to a student who would have to select the correct answer from 4 given choices. Until the student actually made the correct selection, the machine would not move on to the next question.

As it turns out, this machine was not received warmly by the educational world of the time.

30 years after Sidney, B. F. Skinner, a psychology professor from Harvard, invented another teaching machine of his own. He had utilized his own reinforcement theory to design the machine, according to which a behavior is repeated by people and children based on whether it is positively or negatively reinforced.

Skinner’s machine was also mechanical in nature and presented a varied list of questions to a student one at a time. The student would write down the response on a piece of paper and be able to move on if the answer was correct.

As more people in the early twentieth century started tuning in to the radio and making it their primary source of entertainment, institutions began to realize the role it could play in furthering education.

As a result, a number of programs began broadcasting that would teach students and adults alike on subjects like religion, progressive political ideas, current global events, economics, science, and even hobby projects.

Through this novel platform, people could access new ideas that were not to be found in the textbooks they studied in their schools.

In 1960, the University of Illinois at Urbana-Champagne introduced PLATO (Programmed Logic for Automated Teaching Operations) to the world. It was a generalized teaching computer meant to assist in teaching and even provide purely computer-based training for the first time.

The program carried on for the next four decades during which it saw a number of modern features like emails, message boards, and context-based assessment get tested on it in their primitive forms. At its peak in the 1970s, there were several thousand terminals of PLATO spread around the world.

By this time, the idea of using teaching machines for Computer Assisted Instruction (CAI) had taken off. Patrick Suppes and Richard Atkinson, psychology professors at Stanford, started teaching math and reading to children in the Palo Alto elementary schools using computers.

1968: The University of Alberta starts using IBM 1500 to teach online

In 1968, the Medicine Department at the University of Alberta made use of IBM’s 1500, a network of computers that could share information (a primitive form of the internet) to administer courses to a range of students. This was arguably the first impression of modern-day online learning in the history of eLearning.

More than 20,000 individuals were taught around 17 classes in total through this network of computers. The framework allowed teachers to send coursework, receive back responses, and grade assignments remotely.

1969: ARPANET sets up the internet

The ARPANET, or the Advanced Research Projects Agency Network (back then people had a strange knack for acronyms) was the forerunner of the ‘internet’ that we know and depend on today.

In 1969, it was tasked to set up the internet, a much wider-area network that would be made available to enterprises and individuals alike and would be based on secure protocols. This can be hailed as the most crucial piece of technology in the history of eLearning, since it eliminated the issue of massive geographical distances.

It truly paved the way for modern-day eLearning.

1970: Computer mouse and GUIs are invented

Nowadays, we just assume that a computer is incomplete without a keyboard (physical or virtual) and some form of pointing device like a mouse. However, prior to 1970, there really was no such technology, and navigating computers was a difficult task.

The invention of the mouse and Graphical User Interfaces (GUIs) made using a computer so much more convenient, and opened the door to the proliferation of computers. For the first time in history, it was now possible for people to use computers at their homes without much hassle, and this is another foundation of eLearning.

The Open University made two contributions that have come a long way in our age. The first was its CICERO program through which it offered ‘online’ courses using the internet that could earn you credit.

Secondly, it developed the Cyclops whiteboard system, which is best described as Skype or Google Talk of that age. It allowed a limited form of teleconferencing possible through which education could be furthered.

The Coastline Community College was established in 1976 as the world’s first college that catered to the needs of distance learning. It had several ‘mini-campuses’ which hosted and administered online courses to students in a number of arts and vocational training fields.

Although the college now offers on-campus education as well, it was the first one in the history of eLearning to offer a completely ‘online’ degree through self-directed learning.

Apple’s very first Mac, called the Macintosh 128K, was the first real iteration of a personal computer that could be kept at home and easily used to do a number of things. With the introduction of the PC as we know it, a new era of accessibility ensued.

People started sharing information across the internet which was available to everyone who had a Mac at their home. You could surf websites from the comfort of your home and learn about any topic you could find on the internet.

Spread by the consultant Marc Prensky, the term ‘digital natives’ came to recognize all the people who were getting born in the new digital age, and who had access to these technologies while growing up.

Why is this something to mention? This is because these generations grew up with that technology and thus developed a strong intuition of its use, feeling as if this was always an essential part of life. This was not the case for digital immigrants, who had to adopt this technology and adapt to it.

With the computer and internet becoming such important players in the field of education, people started to use Learning Management Systems (LMS) to support and enhance learning on a large scale.

Universities and schools used LMS to track student records, attendance, exams, grades, and even administer notices and fee vouchers. Blackboard turned out to be a pioneer in this field and developed a successful LMS package that is used by 75% of colleges and universities in the USA.

In 1999, this growing phenomenon of people learning through computers, getting online degrees and using the internet to spread education finally got itself a name: eLearning.

The name was put forward by Elliott Masie, a researcher, and educator who used the term in a conference on CBT Systems. Ever since the name has stuck and has now impacted the lives of millions of people around the world.

Around the start of the twenty-first century, eLearning was picked up by increasing numbers of businesses who found it to be an effective way of training new employees or helping older ones refresh and improve their skills.

Instead of investing in pricey seminars and workshops, companies could host all of their learning material on an internal intranet where it could be accessed by the employees. Employees would have a training plan which would guide them regarding what they would have to learn through the platform.

Almost every company in the world now resorts to eLearning for employee learning and development.

The Massachusetts Institute of Technology (MIT) made a gigantic first step in making high-quality educational resources freely open to the public by launching the ‘proof-of-concept’ website of its OpenCourseWare project.

The website contained 50 courses that included video lectures and assignments from MIT’s top professors. Since it was backed by the Creative-Commons license, anyone could watch, download, share, and edit the material based on their needs.

As of 2016, there were 2 million visits every month to the OCW website, which has become a popular resource of online learning.

Udemy, one of the world’s largest and most popular online course platforms was founded in 2010 by a trio of Turkish professionals. Although it started out small, it ushered in a novel eLearning business model that has catapulted it to great heights of success.

As of January 2020, over 57,000 teachers and giving online courses to more than 50 million global students in more than 65 languages.

Students can browse a never-ending catalog of courses on the website and buy them to get full lifetime access, hours of video lectures, practice questions, and certificates of completion.

With the wildfire-like spread of social media platforms like Facebook, YouTube, Twitter, and LinkedIn, learning has now become a widely available resource. Nowadays, people are found scratching their heads while deciding what they should learn instead of worrying about how they should learn something.

From short-form blogs, twitter threads, and one-minute videos, to hour-long documentaries and bite-sized courses, learning is now available in a number of different forms, each suited to a different kind of person.

Couple this with successive generations that are completely steeped in social media, and you have students who learn more online than they do in school.

The COVID-19 outbreak was the first event in a long time that dealt a real blow to traditional classroom-based training and openly exposed the limitations of this form of learning.

With lockdowns getting implemented all over the world to curb the spread of the virus, students of all ages found themselves stuck at home with education having been brought to a complete halt.

In this testing time, parents and educational institutions alike were forced to consider and adopt the alternative, i.e. of eLearning. In a short span of time, students starting attending live online classrooms where a teacher would be teaching from her home using teaching software.

Because of the pandemic, the world has come to see the versatility and benefits of eLearning, and this has already convinced a lot of people that this is now the way forward.

Below is a quick snapshot of the progression and history of eLearning, plus key milestones.

My name is Lewis Keegan and I am the writer and editor of SkillScouter.com. I'm extremely passionate about online education and what it can do for those to better their lives. I spend most of my time blogging, hiking, and drinking coffee. I also have a Bachelor's Degree in Education and Teaching. 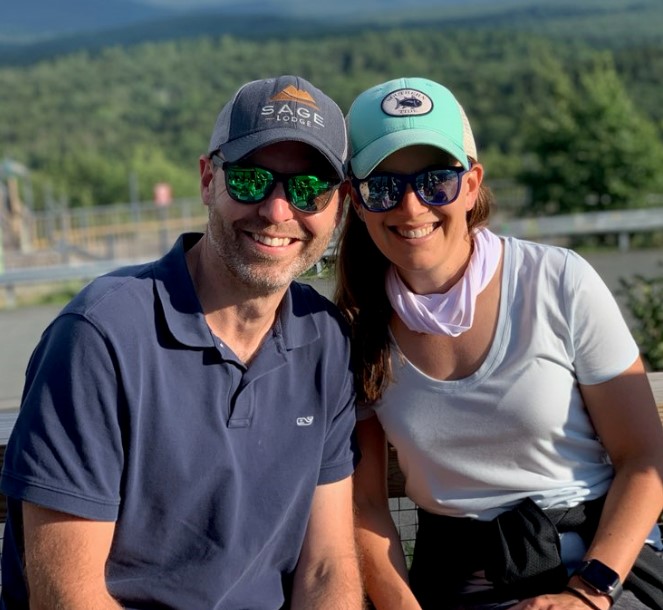 Hey everyone! Thank you for visiting.  We’re David & Marsden Kline, the owners & editors of SkillScouter.com.

We are passionate about online learning. Our hope is that our online course reviews and career advice help you to learn new skills online and grow your business, career, and hobbies.

Disclaimer: When you buy through some links on the site, I may earn a commission.